In fiscal year 2015, the primary drivers of the portfolio’s outperformance were the private equity and venture capital investments, and hedge funds. The key external factor was the devaluation of the Canadian dollar. Due to the JCF’s currency hedging policy only a portion of the currency gains were realized by the pool. Due to interest rate reductions fixed income was the surprise performer of the year. The portfolio outperformed its policy benchmark by 1.04% for the year.

This performance is directly related to the investment policies and strategies of the committee – primarily to use a fund of fund investment approach, to diversify the pool into an array of asset classes and to hedge investment strategies to mitigate risk against significant losses. This will be further explained below.

During the last fiscal year the markets responded positively but not dramatically ending the strong bear run. Equity markets performed adequately during the period with the S&P rising %, the MSCI 5.42% and the S&P/TSX composite 6.93%. 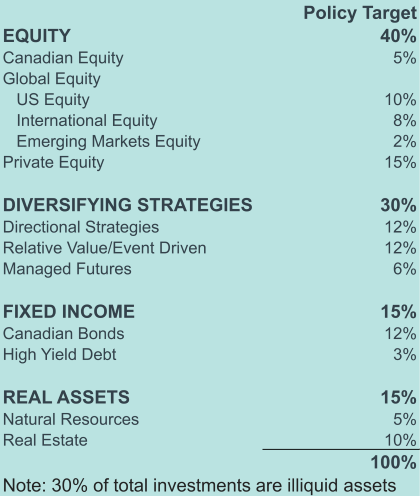 This category makes up 40% of the fund and includes traditional market equities (Canadian, U.S. and foreign), private equity, and distressed debt.

Our U.S., International, and Emerging Markets Funds, managed by Commonfund and State Street are managed using a combination of passive indexed and active strategies. These investments reported a 6.34 % gain against a benchmark of 5.92% (25.9% allocation).

Our Private Equity and distressed debt fund of funds (“fofs”) reported a 11.91% aggregate return. These “illiquids” continue to contribute positively to the total performance of the pool.

12.4% of our assets are placed in this asset class and lost 7.93% due to the commodity collapse.

25.3% of our portfolio is placed in hedge fund FOFs (managed by Commonfund and HSBC), which gained 7.23% against a benchmark of 5.37%. Our hedge fund managers in fiscal year 2015 actually outperformed the public equity markets. These
hedged investments performed above their benchmark and added value on a risk-adjusted basis.

Fixed income assets generate stable flows of income, providing greater certainty of nominal cash flow than other asset classes. They have the lowest historical and expected returns of the asset classes included in the JCF’s portfolio.

16.1% of the pool is placed in fixed income. Over 80% of this allocation is run by State Street in a Canadian Fixed Income Index Fund, with the balance basically invested in Israeli Bonds which the pool has traditionally held. The net return on fixed income was 10.01%., which was completely unanticipated and a result of interest rate reductions.

This past year the Canadian dollar depreciated 12% against the US greenback, as the exchange rate moved from 0.904 to .78. The Investment Committee partially hedges currency fluctuations. In an environment where the Canadian dollar depreciates, hedging currency moves partially reverses the upward valuation effect of assets denominated in USD. JCF’s currency
hedging policy partially hedged the portfolio over the year, which resulted in a performance benefit caused by the unhedged portion of our holdings in an appreciated USD environment.

The market has performed adequately and the results bear this out. The Investment Committee will maintain its policies of diversification and hedging.