For the year ended March 31, 2016, the Jewish Community Foundation of Montreal’s pooled fund had a return of -3.2 percent. The average annualized return for the last five years has been 5 percent.

2016 was a turbulent year with fears of an economic slowdown in China, questions about the viability of the European Union as Greece negotiated another bailout plan, and oil prices that plummeted 19.5 percent over the fiscal year.

Loose monetary policy in much of the world has led to continued low interest rates, and in some instances negative interest rates. With that environment as a backdrop, JCF’s Canadian Fixed Income portfolio gained 0.7 percent, in line with the benchmark of 0.8 percent.

Hedge funds, down 0.9 percent, were able to provide shelter from equity market declines and volatility. Sector rotations and investment themes switching from risk on to risk off made it a difficult environment for stock pickers, but market neutral strategies did relatively well. JCF’s Diversifying Strategies portfolio outperformed its benchmark, the HFRI FoF Composite index, by over 475 basis points. 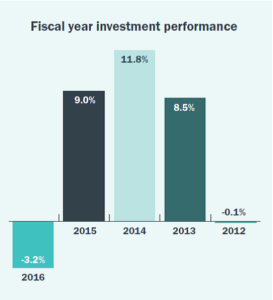 The Fund uses a dynamic currency hedging policy approved by the Investment Committee with the aim of reducing the foreign currency risk and removing most of the short-term currency volatility and the resulting impact on spending. However, a portion of the USD investments are not hedged in order to provide another source of diversification to the portfolio.

This past year the Canadian dollar depreciated 2% against the US greenback.

In an environment where the Canadian dollar depreciates, currency hedges cost the portfolio. JCF’s currency hedging policy resulted in the portfolio being fifteen percent unhedged over the year, which mitigated the hedging costs a bit. The unhedged return would have been -1.8 percent while the actual portfolio return was -3.2 percent.

The JCF has a long-term outlook and its investment policies seek to generate returns that will support the programs funded by our donors. The investment policies and philosophy are set by the Investment Committee – primarily to invest for the long- term, to use a multi-manager approach, to diversify the portfolio by investing in an array of asset classes, and to have an allocation to hedged investment strategies with the goal of smoothing the Fund’s return volatility over time. The policy targets as of March 31, 2016 were: 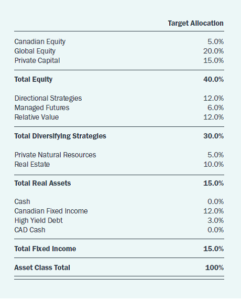