Use the tabs below to find information about our latest investment report, access our most recent audited financial statements and view our current administrative fees.

For the year ended March 31, 2020, the Jewish Community Foundation of Montreal’s pooled fund had a return of -2.2%. The average annualized return for the past ten years has been 6.3%.

For most of 2019, the global economy performed well
even amid trade tensions between the US and China.
Both countries agreed to a trade deal, which brought some
stability. This economic stability came to a halt in early 2020,
as coronavirus cases spread quickly around the world. By
early March, COVID-19 was declared a global pandemic by
the World Health Organization. Global economic activity
soon grounded to a halt as businesses closed, global
supply chains were disrupted and consumer spending was
curtailed. In response, financial markets responded with
huge drops in equities, a rise in credit spreads and a flight
to the safety of government bonds.

From a capital markets perspective, Canadian equities were
significantly negatively affected by the pandemic, losing
20.9% in Q1 of 2020. Overall, the S&P/TSX Composite
Index returned -14.2% for the JCF’s fiscal year. The decline
was driven in large part by the weakness within the Energy
and Financials sectors. The economic impact of COVID-19,
coupled with a price war between Saudi Arabia and Russia,
sent crude oil prices plummeting by 67%.

On a global basis, it was much of the same as the impact
from COVID-19 was felt across the world. The decline
during Q1 2020 was consistent with that seen during past
average recessions. The MSCI World (Net) Index posted
a -4.5% return in Canadian dollars during the fiscal year,
led by the US market, while Emerging markets returned
-12.3% for the same period.

Equities in developed markets recovered a portion of
their losses in the last few days of March. However,
by quarter-end, most markets were still down sharply
from their February highs. The Canadian bond market
posted positive gains for the year, with the FTSE Canada
Universe Bond Index returning 4.5%. The rapid spread
of COVID-19 prompted a rally in developed government
bonds in CY Q1 2020. However, credit suffered as credit
spreads widened.

Private market investments saw mixed performance
during the year, with large amounts of capital put to work
by global investors. In 2019, private equity saw a record
year for fundraising, backed by some megadeals in the
US. Investment activity in this asset class was subdued
in early 2020 due to COVID-19, with declining valuations
across different sectors and regions. Infrastructure and
Real Estate markets’ fundraising momentum continued,
with Q4 2019 being the strongest quarter of the year. In
Real Estate, distressed buying opportunities have arisen in
Europe, while vacancy rates remain low in North America,
however the impact of COVID-19 is not yet fully reflected
on asset valuations. Private debt fundraising declined
sharply in 2019 and 2020 given the potential for increasing
payment defaults with lower recovery rates. The majority
of capital raised in Natural Resources was in energy, since
US oil production was at an all-time high in 2019. However,
in early 2020 prices were affected by declining demand
and the Saudi Arabia/Russia dispute.

Hedge funds were up 2.9% for the fiscal year (USD)
providing very good diversifying performance compared
to equity markets This performance is not necessarily
surprising given the portfolio’s risk-reducing mandate and
the volatile nature of market returns, more specifically at
the start of 2020

The Fund uses a currency hedging policy approved by the Investment Committee with the aim of mainly reducing negative effects of currency fluctuations while attempting to benefit from positive fluctuations. The hedging of USD exposure will be adjusted quarterly in light of the perceived value of the USD/CAD exchange rates vs the purchasing power parity published by the OECD.

Over the fiscal year, CAD depreciated -6.2% (the worst quarter being CY Q120) against USD. The Canadian dollar decline was driven by a combination of USD strength and declining oil prices during a major part of the year. As the pandemic hit, the USD strengthened as investors shifted heavily into USD for security and stability. In an environment where CAD depreciates, static currency hedges would subtract from the portfolio’s returns. JCF’s flexible currency hedging policy resulted in a positive outcome. The unhedged return would have been -2.6% while the actual portfolio return was -2.2%.

The JCF has a long-term outlook and its investment policies seek to generate average returns that will support the programs funded by our donors. The investment policies and philosophy are set by the Investment Committee – primarily to invest for the long-term, to use a multi-manager approach, to diversify the portfolio by investing in an array of asset classes, and to have an allocation to hedged investment strategies with the goal of smoothing the Fund’s return volatility over time. The policy targets and actual exposures as of March 31, 2020 were: 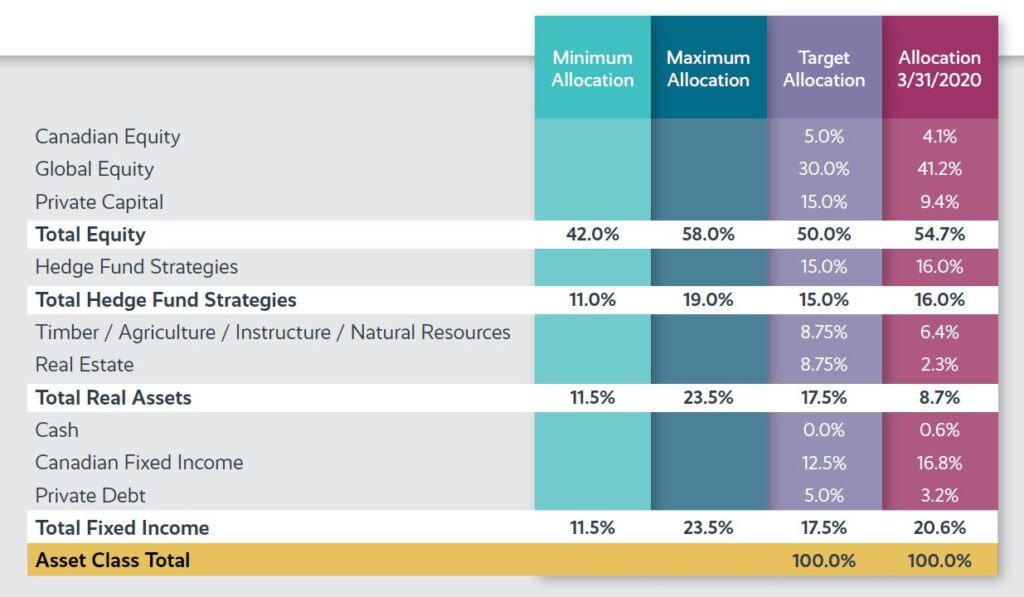 The annual fee structure for funds held at the JCF is as follows: